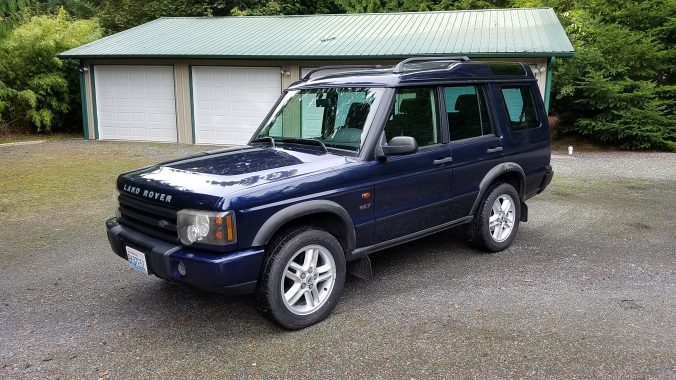 And the replacement for the Mini, which was a practical and fun car to drive, is…a Land Rover Discovery–which is not really any of those things. And wait, we’ve been here before!

I’m the third owner, and the Disco has pretty low miles for this year, at 75,000. Everything seems to work, though there is a fair list of things which I should probably attend to:

That all said, the A/C works, the various power things work, it runs pretty well, has newer tires, decent condition wheels, sits ok on the road and generally seems to drive like you’d hope a heavy, short-wheel-base, somewhat under-powered SUV would.

This car is painted Oslo Blue. You can see a big oops on the roof…there is no actual panel damage (i.e., no dents), so maybe something was dribbled on the car? There is a lot of weird white goop (insert joke here) in places around the machine, which might have been toxic to the paint, but who knows. The edges of the roof are also losing their paint, and my impression is that the paint job (it is the original) is just not all that good.

I will clay bar and polish the car, and have ordered some touch up in spray cans to at least keep the bare metal clothed in some paint. Aside from the roof blurp, I bet the paint will polish up well–the car is straight, I’ve only found one door ding.

I paid $2,500 for this, as you see it in the photos, all I’ve done here is wash it and run over it with the shop vac. Considering some of the other machines I looked at for a fair amount more money, it wasn’t a hard decision to make an offer on this car. We’ll see how maddening (or not) it is to live with!