Wish People Would Tell Me When They Sell My Stuff 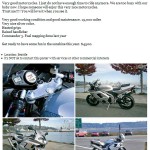 Spotted this ad on craigslist tonight–someone selling their Daytona…but the photos of “their” bike are straight from this website. Sad thing is that anyone in the know would recognize the slight of hand, as the bike they’re selling would have a different rear suspension than mine. *Facepalm*

On a semi-serious note, though: when looking at CL ads, it’s not all that uncommon to discover that the photos in the ad are NOT of the car or bike you end up poking at when you go to see it. My Miata was sold that way: the car shown in the ad was very clearly not the one I ended up buying. I asked the seller about it a couple of times and she insisted the photos were recent ones of my car, despite a number of major differences.

It’s not the end of the world to use a “representative sample” in an ad, just let people know. And if you’re going to grab someone’s photos, maybe ask permission?