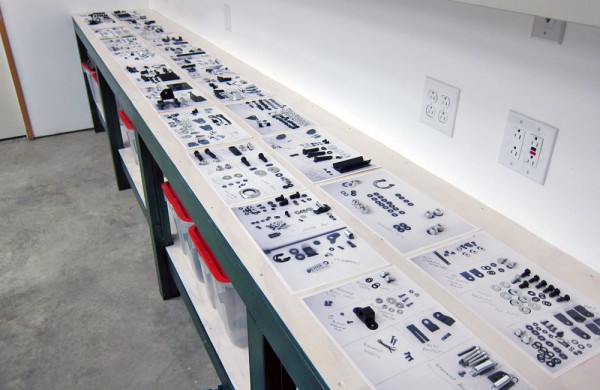 Most of my fasteners have been re-plated–I’ve now finished the tedium of sorting the various items back into their proper place. Above and below are photos of that process. I took (bad) digital photos of each baggie’s contents back in 2002, before dumping the stuff into one big box for the platers. This turns out to have been barely enough information, and I should have recorded much more. 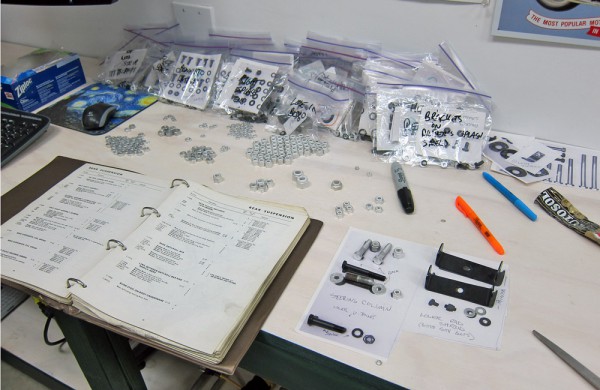 If I did it again, I would:

I’m sure I have some fasteners misidentified and I have a troubling number of extra fasteners, which probably means they were just thrown into a box way back when because, heck, how hard could it be to put them back? What’s interesting is how, for example, all of the seat bolts are missing from the plated stuff, including the spacers. This means I did something with them after photographing them but before they went to the plater. Weird.

I’d say 80-90% of the fasteners on the car will be original; I’ll lay in a stock of black oxide bolts, shake-proof washers and cad nuts for those places something is missing.

My biggest remaining dilemma is the odds-and-ends chrome that remains un-plated. It’s about four to ten times the cost of buying new to have them re-chromed, but I’m not sure how much is available, and, frankly, pattern parts can be pretty bad, only approximating the original. But take the rear-view mirror as an example: There are four or five (small) pieces of chrome on it, each costing about $50 to plate. Then you have the case, a few screws, and the glass itself. In all, it would be about (I’d guess) $500 to restore. You can get a reproduction of the entire assembly for less than $60.

I’ll think about it.

One thing I wish for, as I’m in this stage of the project: a supplier with a decent online shopping experience. The major vendors all have online catalogs, but they’re very slow and don’t always have every part they sell. They generally also have absolutely awful keyword searches, so you pretty much need to know the part number yourself before you look. Finally, the user interface design on most is not so hot; either you can’t find your cart or you can’t find your way back to the place you wanted to be.

I recognize something is better than nothing, but it seems like the way to do this would be to simply use the Jaguar parts book(s) and have clickable plates and reproduce the assembly lists, the idea being that if you’re working on the heater box, for example, you can just click on the pieces you need and be done. (You obviously still need part number lookups and keyword searches, too.) Moss does this (to greater and lesser extents) with their MG stuff, and it’s a pretty nice way to order. I’m a guy who loves online ordering, but the big orders I’ve placed so far have been done by phone–the salesman at the other end generally knows the thing I want but cannot find via their websites.