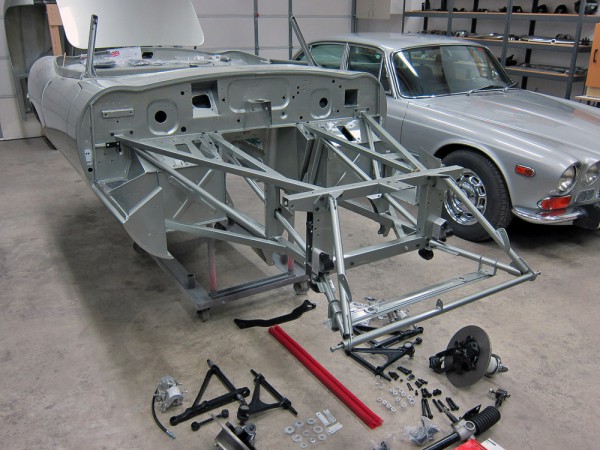 This was a lot more “exciting” than I had hoped, or anticipated. The car was painted with the framework in place, though that’s not how early cars were painted–a decision we arrived at as the bonnet was shimmed and fit nicely. Plan was, I would later removed the temporary frame bolts one at a time, replace them with the refinished bolts, and no one would be the wiser. Ah, had it been so easy.

The problem: the lower bolts on the inside of the frame were (apparently) never test fit and, indeed, would not fit. The right side wasn’t awful, but the left side wasn’t close. This is a fairly crucial thing to have right, as the reaction plate and engine mount have a tight working relationship.

In the end I had to remove the frames entirely and start again…fitting the lower bolts first and then working up from there. In retrospect painting the frames off the car would have been the right move. For extra fun, the right frame was contacting the tub where (probably at my direction) we had removed the factory dent that allows the round diagonal tube to clear the tub, so I had to re-install this dent.

Once I had the lower inside bolts fit on the right frame, the rest went in without too much struggle. So far, so good. But the left frame wasn’t to be so forgiving. After doing some checking, the left frame’s lower-outside-mounting-pad’s attachment point is about 3/8″ from where it needs to be. This is not uncommon, many early cars apparently left the factory that way; they often just bent the frame with a hammer to “fix” it.

With a painted frame, that wouldn’t be very cool. In my case, I was able to get the frame bolted to the bulkhead through a bit of creative use of a punch as a lever…but when it came time to bolt the picture frame to the front of the engine frames, the frames were about an inch too close together at the bottom. (FYI, you cannot spread triangulated steel frames that far apart with your hands. About an eighth of an inch is it!) 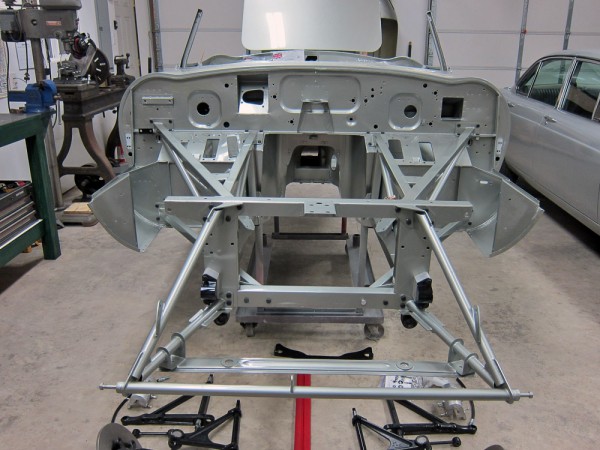 After consulting my friendly experts online at xke-lovers, I used a screw jack between the lower frame members (just in front of the engine mounts) to spread them apart. Even so, because there was also a bit of a twist in the left frame’s position from the misplaced pad, it made nearly every bolt a bit of a struggle to place, but I got them in, eventually.

I did some quick “squaring” measurements from points on the tub and the frames miraculously seem close to exactly where they should be.

Next E-Type I restore (and if I do another I need to learn to weld, as my days where I can pretend to have the money to pay for bodywork are behind me), the frames are getting completely bolted into place–and, ahem, adjusted–before any paint goes on.

All things considered, not too much paint rash was added to the car from this struggle, and I’ll touch it in when I get a chance.

Inexplicably, one of my original bolts was re-plated in cad instead of black oxide; I’ll carefully give it a touch of matte black paint to disguise that. You can see it on the lower cross member of the picture frame, above.