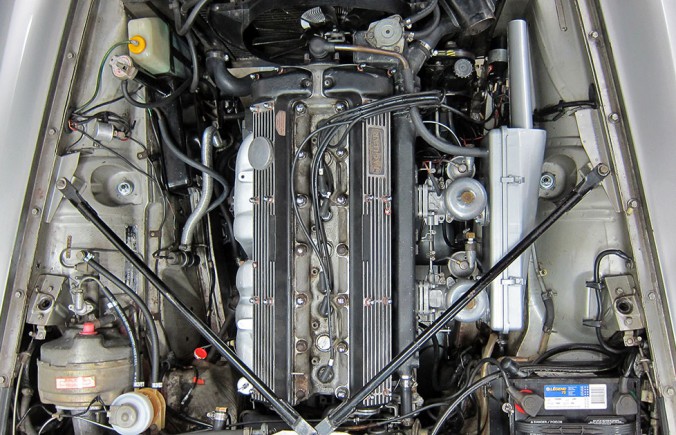 This project was long, involved, and expensive–but in the end the car runs better and is a lot more responsive, and while I haven’t actually measured it yet, the fuel economy seems better. You can see that the Strombergs are gone, and in their place are a couple of HD8s–in this case partially from a Rover 2000 (bodies, choke linkage) and partially from a Mk. X Jaguar (dashpots and pistons, throttle plates). The inlet manifold is an English-spec SU manifold (in this case from a 2.8) and the air cleaner is a very early XJ6 cleaner which has been modified to allow the engine breather to feed into it.

I made the mistake of putting in the “hottest” thermostat available. The car runs fine, but it also runs much hotter than before. Good for efficiency, but it leaves very little margin for hot days if there is a cooling problem.

Rover HD8s are unusual in that they do not have the “slow running” circuit at all, instead, the idle is set in a fashion similar to a HS or other SU carb. But the bodies still had the lower passage below the main throttle opening, and said passage, which goes nowhere in the carb body itself, is located in such a way that the carb cannot be sealed given the mounting arrangement. I solved that by threading the passage with a tap, screwing a bolt into place, cutting the bolt off nearly flush, and then carefully filing it flush.

Anyway, at this point it’s back to the E-Type!