I don’t think every nut and bolt has been undone, but we’re close. Thankfully, the part I like least, removing ancient grease from everything, is mostly done, though that means a fair amount of equally tedious blasting awaits. 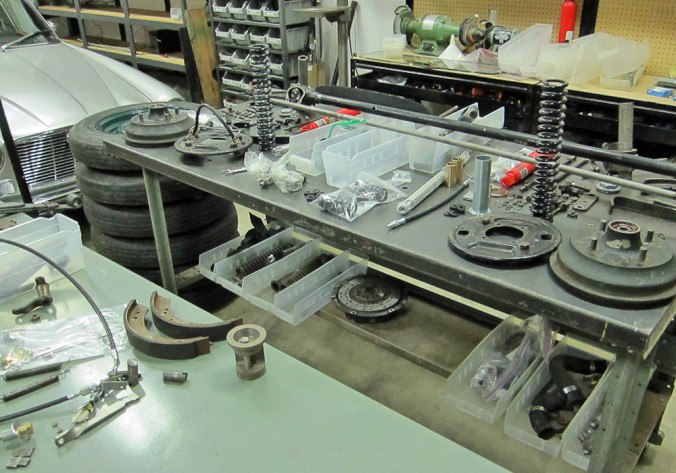 I’m using the lower shelves of my two portable work tables to store those parts being replaced. This way I can reference them as needed, but keep them out of the “flow” (or “clog”, which is more accurate).

The above table has the front suspension pieces on it, as well as the steering and master cylinder parts. Some bits are new, some are awaiting blasting and paint. I need to put the new bushings in the spindles and ream them…I’m trying to decide if I want to do that myself or haul the bits to a pro. 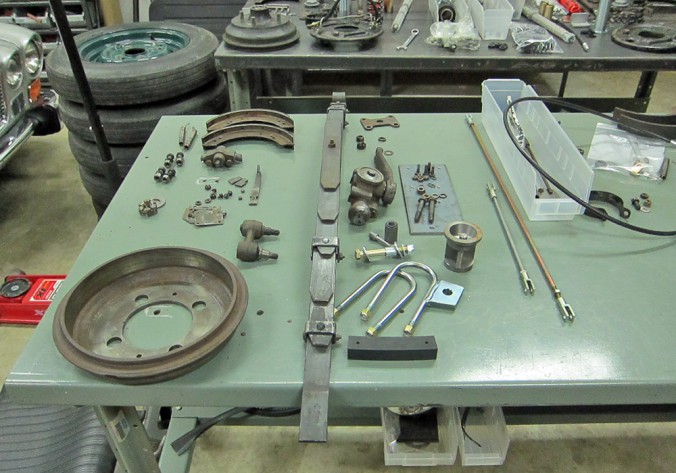 This table is weighed down with rear suspension, brakes, and parking brake bits. This is the set for the left side — cleaned, but not blasted. I ordered new brake cylinders from jolly-old, and the brake backing plates were on the axles, which have been freed from the taper at the machine shop and will be back soon. 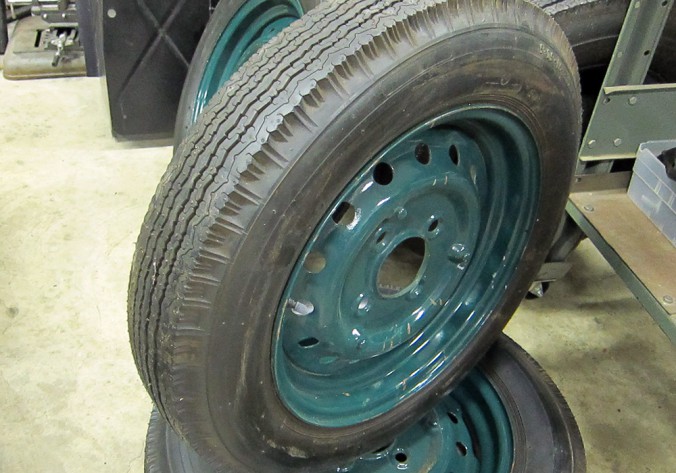 Including this exciting picture, as this may in fact be an original tire, an ancient Dunlop Gold Seal. I’m trying to decide which expensive bias-ply to buy, none are the exact size, and the way the spares fit in the body means care has to be taken to not end up with tires too wide to slip into the spare wells. 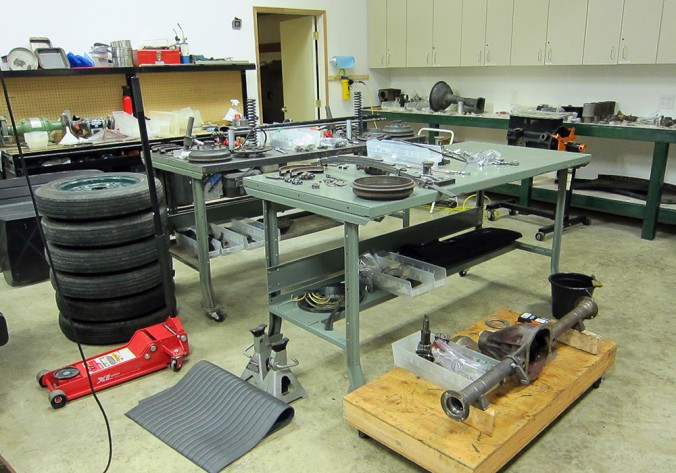 I have to take the axle housing to a shop, assuming I can find one willing to do the work, to be straightened. The gears look pretty good, actually. I have new bearings and seals for it.

Along the back, the gearbox and engine parts lie scattered on the bench. 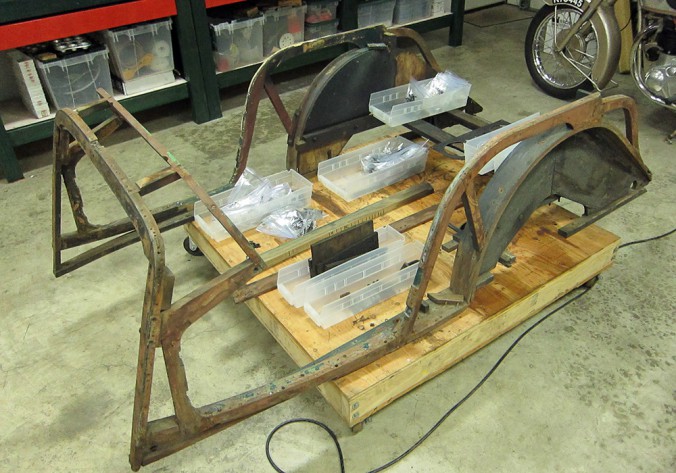 Our friend the body, with bins o’ bits mostly associated with it in some way. 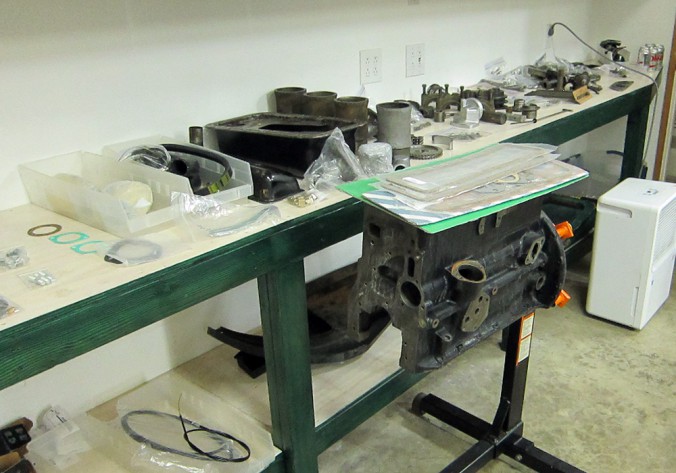 The engine end of the back bench. The crank (away at the machine shop, along with the other rotating bits) is being turned .030 on the mains and .020 on the rods. The engine will be getting the 2.2 litre liners for a TR4, as they’re cheap and a bit of extra capacity never hurt anyone. 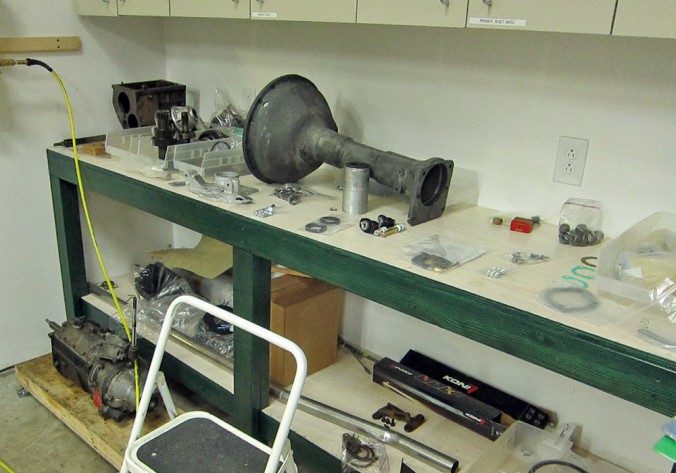 I have all the parts to put the gearbox back together. I need to remove not one, two, three but four broken bolts from the main casting, all a result of the awful mount bodge. Thankfully I have a Helicoil kit, and the box doesn’t use whitworth-threaded fasteners there. (Or won’t, anyway, if the bolts can’t be coaxed out and I have to repair the threads!) 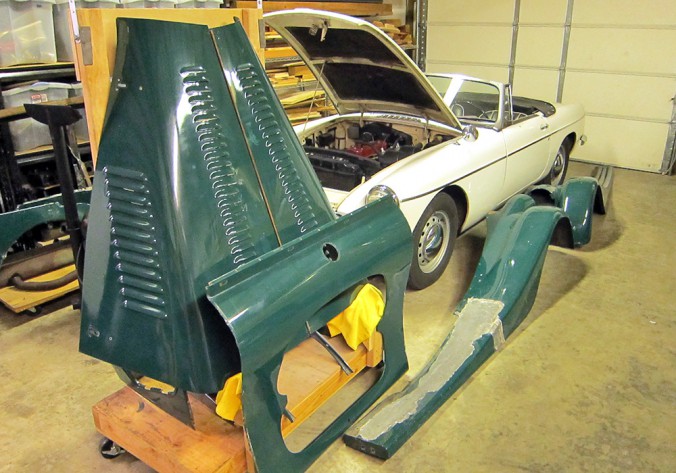 On the other side, the long-suffering MGB is hosting a party for those sheet-metal bits destined for the blasting shop. 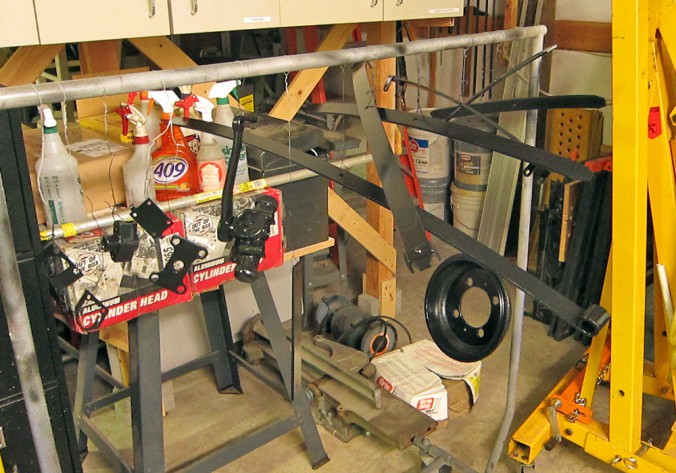 A rather bad photo showing the right leaf spring and other suspension bits, after blasting and paint. 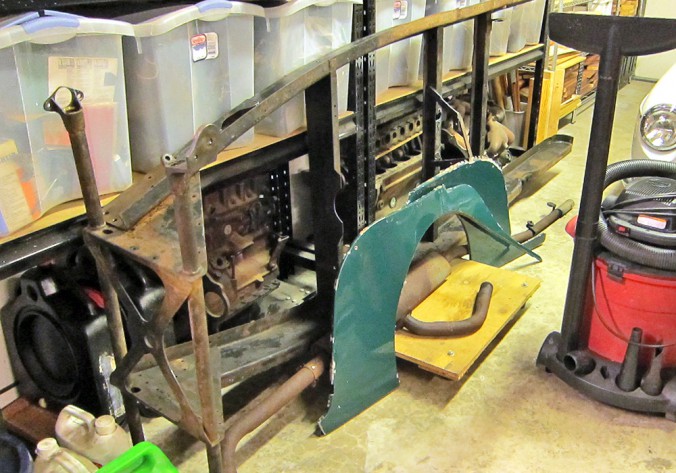 And finally, the eventual “recycle” stack, those metal bits which are being replaced but are too big to go under the tables. I’m halfway tempted to hang the chassis on the wall, but it would then just end up as the Biggest Spider Habitat.