1955 was the last year of rear springs secured with “sliding trunnions” on the Morgan +4 — for those fortunate enough to not know, the rear of the leaf spring was plain, rather than fixed by an eye and shackle. Instead the leaf goes through a “trunnion” held within the rear tubular (totally!) cross-member.

Above is one of the new trunnions I was fortunate enough to source…the spring rides along the big flat of the slot in the cast steel, while the pin (not pictured, it goes through the large hole) is there as insurance, though it’s impossible to completely unload the suspension (assuming the chassis is still attached). It’s hard to picture a scenario where the leaf would ever contact the pin. Axle tramp when trying to feed all 75 or so horsepower to the road, perhaps? 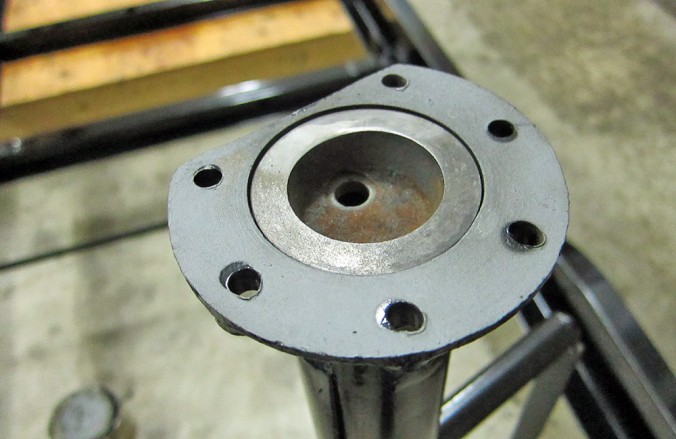 The tunnion needs to be able to “float” within the cross-member, as it may rotate a tiny bit as the spring compresses. Above is one of the originals in place, you can see how it sits well within the tube. 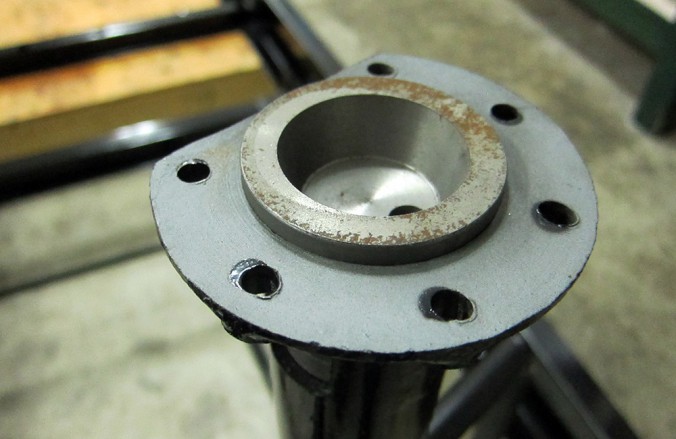 And this is how the new one fits. Oops! I should have anticipated that I would need to get the files out… 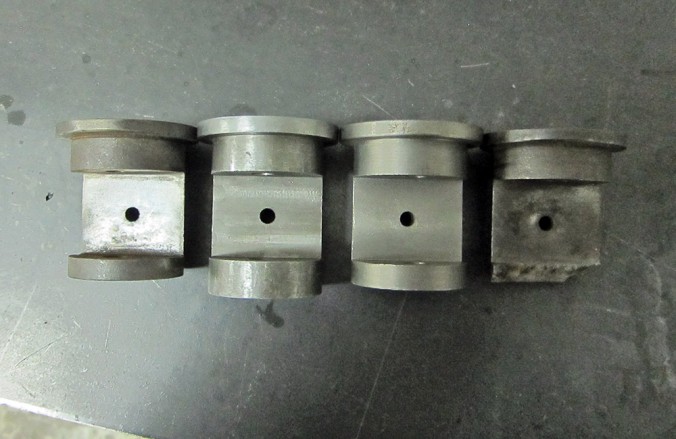 Above are the two (broken) originals on the outside flanking the two new ones, the right-hand of which I’ve started to modify to fit. It amuses me the two new ones don’t match each other, but the three critical dimensions — diameter of the inner cylinder, width of the slot for the spring, and the distance from the inside of the lip to that slot — are the same on all four, thankfully. You can see in addition to being slightly smaller in diameter, the tops of the old ones are much thinner, too. 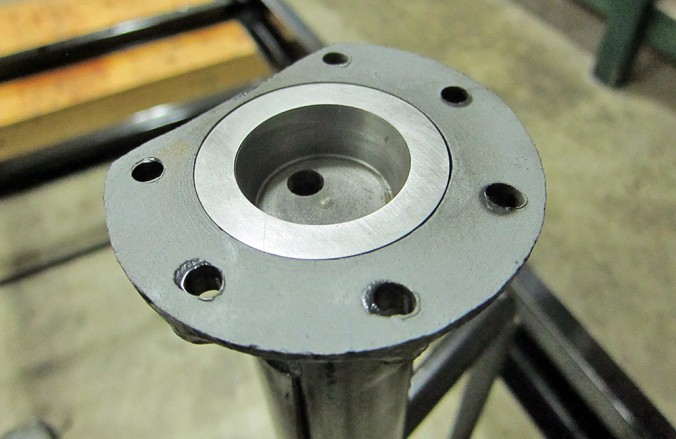 This is a finished new trunnion in the tube (upside down, by the way, the pin hole goes opposite the flat). The lip was about 1/16″ too thick, but here is has been filed down so daylight (shoplight?) can be seen between the piece and a straightedge laid across the tube. I think there is roughly 20 thousandth here, rather than the 1/16″ of the originals, but an old man’s arm can only file for so long… 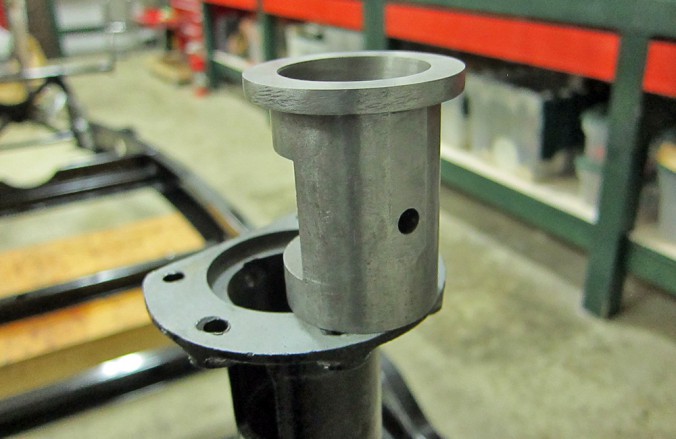 I also filed a “grease guide”, as seen on the original. When grease is pumped into the cross-member, you really want it to find its way into this hole, which leads down to the top of the leaf spring. Without a guide like this, I think very little grease would end up there; most would find its way off the inside end of the trunnion, into into the cross-member for a future restorer to curse at.

As it is, once the spring has been secured in the front, there is no way to completely unload the suspension, so I am not sure exactly how effective this whole setup is, as far as delivering grease to the top of the leaf, as it needs to be forced out of the hole while the path of least resistance will be as mentioned above. By putting the car on stands under the chassis, you can probably figure out a way to pull down on the rear of the leaf. Maybe.

The grease points here have the shortest service interval (every 500 miles) too. 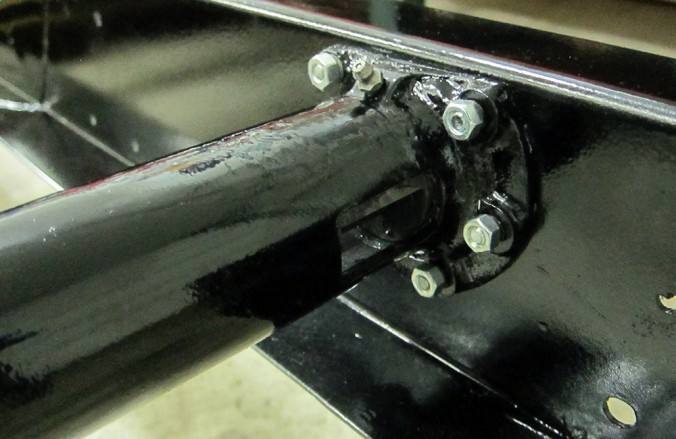 I’m happy to report the trunnion “floats” and can be turned by finger pressure, so the filing was not in vain. You can just see it within the slot in the cross-member. 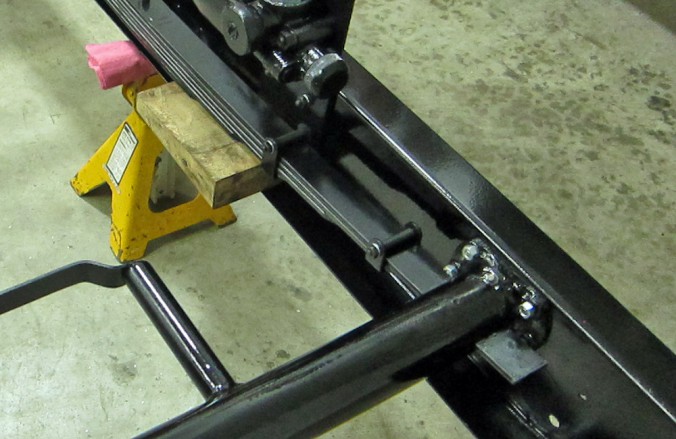 And here’s the spring in place.

(The chunk of wood is there because on a Morgan the unloaded spring does not fit without striking the chassis, and you have to put the block in so the u-bolts can be put into place.) 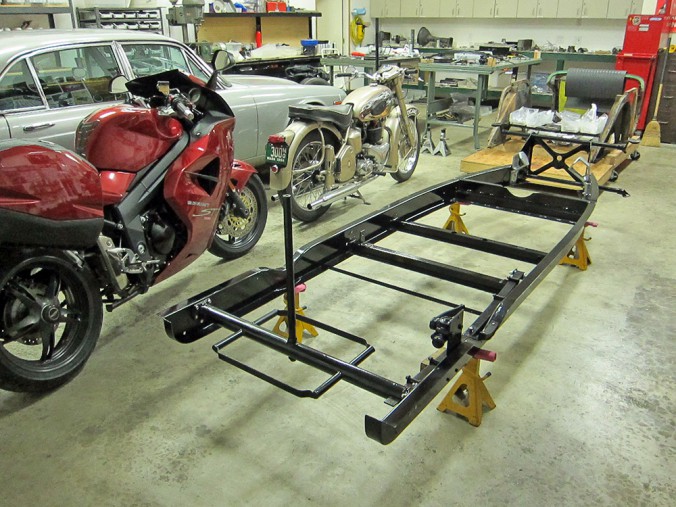 This is where I’m at, hopefully today I can get the other side done and the steering box temporarily mounted.