Literally! My latest machine doesn’t have a working reverse gear, among some other “minor” glitches. I probably won’t keep this car, a 1994 Jaguar XJS–I bought it to help a  friend who was losing their storage, and faced an expensive repair bill to get the car saleable, at an inopportune time.

This is what they call a 2+0 Convertible, as it does not have a rear seat, with the 4-litre six-cylinder engine and an automatic transmission. It has 34,000 miles on it and, as you can imagine with that few miles, is pretty darn clean. It was sold new in California.

Cosmetically, ignoring the top (more in a minute), the paint is actually pretty nice (it could use a light buff) and the interior is in good condition except for the wood in the center console, which has chipped. “Wood” might be a better way to put that, it’s about six microns thick.

Back to the top…it’s fairly good, but with some abrasion damage where it folds. This seems pretty common, looking at photos of other similar cars. The headliner is only OK, with some staining–again, that seems fairly typical. Not going to do anything about either, in all likelihood. I will say it’s novel to have a top which goes up and down with a switch. 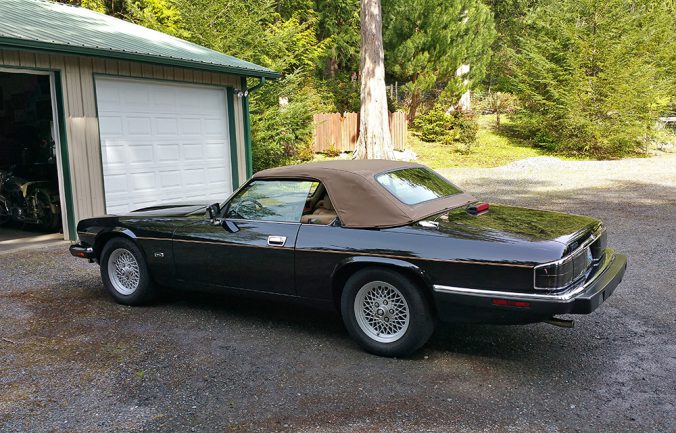 As my friend Steve says “friends don’t let friends buy black cars.” I think this is only the second black car I’ve owned, the other being the 100-Six Healey. You can see the rear window issue mentioned below in the photo above.

The car needs the following:

Anyway, hoping to sort it out and find her a new home over the next month or two. My wife laughed her arse off at that one, hopefully y’all will be more dignified in your responses!