The Amazing Mileage of Cars of Yore 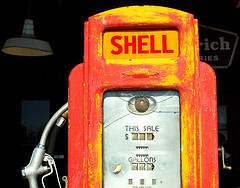 Being just a tad mental, I cruise craigslist almost every day to check out what might be for sale in their “ye olde English clunker” section. With gas prices what they are, copywriters are getting quite imaginative in their descriptions.

I have owned a number of MGBs, some good, some crummy, some with twin carbs, some with single Weber DGVs, and I have never, ever gotten much more than 27 MPG–on the highway. I’ll concede that a nicely tuned, overdrive-equipped car with a gentle driver could possible get somewhere in the low 30’s–again, on the highway. However, I now see ads touting 35, 40 and even 45 MPG from the Abingdon product, which is ridiculous. Heck, 40 MPG would be stretching it from a Mini 850 or an early Midget.

There’s an ad for a Jaguar XJR similar to the one I owned that suggests it’s “a powerful gas-saver.” Uh, sure. I got in the mid-teens from mine around town and no more than the low 20’s on the highway. I suppose compared to my F250 (about 10 MPG no matter what) that’s saving, but…c’mon. Are we all so used to driving giant SUVs that anything above 12 MPG is considered frugal?

Of course, the same folks who make up MPG figures like this also believe everything written in the laughable NADA Price Guides, which exist solely so state departments of licensing can rip you off when it’s time to transfer the title on your car. Hint: take the values in NADA and divide by two–that’s a good start; go down from there.

An older car whose surprising mileage claims you can believe (a little!) are 88-94 XJ6 (XJ40) sedans. They’re kinda crummy around town (17 MPG) but on the highway I achieved over 30 MPG on a very fast trip from Seattle to Eugene, Oregon. For a big, heavy luxury sedan, that’s pretty reasonable.

Thanks to cobalt123 for the use of the photo.