Here’s the inside of the shop, as you can see I haven’t done a whole lot with the organization of the space. (You can click for a larger image.) 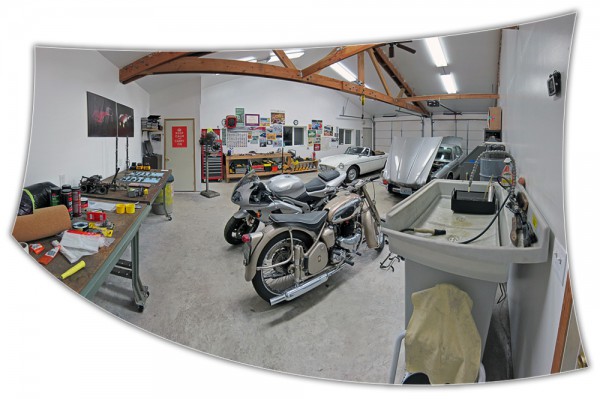 I hope to build in some cabinets and what-not this winter, mainly on the wall where I have a couple of ancient Ferrari posters tacked up (I found a stash from ages ago…anyone for a 1980’s Testarossa poster? I managed to put that one back in the tube). I did get casters onto the metal work tables, they’re now handy for moving close to the action or allowing access to all sides of an unwieldy project.

On the table closest on the left is a pile of junk awaiting sorting and placing into the other side of the building. Right below the posters are the camshafts from the XJ6–I’m doing a valve adjustment, and am awaiting new cam bearings and shims. In the corner beyond that is an ancient file cabinet with my shop computer on top and my elderly stereo above it. I finally have a sink for the bathroom, and hope to work on that a bit tomorrow (keep calm and all that).

Beyond my trusty Delta drill press (I think it’s circa 1956) is my toolbox; I hope to move to a couple under-bench units when I build a new bench along that wall, in about the same place and scale as this one, but secured to the wall, and wrapping around the corner towards the press. The white MGB is serving as a shelf for the dash top and a few other components of the XJ6–one of the windshield wiper wheel boxes stripped out, and I’m awaiting some new used ones. I figure after almost 40 years in Washington, that’s fair enough.

I also have the rear mufflers off the XJ6; I bought new tips, the proper curvy variety as opposed to the straight ones which this car has now. Imagine my (lack of) surprise when I pulled off a couple of standard American mufflers which had been creatively made to fit, and which will definitely not take the new tips. So I’m trying to figure what to do about that, too.

The bikes are pretty much in for the winter. I need to do a fluids change on the Triumph–oil, coolant, and bleed the brakes. Bike will be ten years old this coming year and while it hasn’t had many miles put on (just a little over 3,000 now), the oil has only been changed a couple of times and the other fluids have never been touched.

To the right is the parts washer, the blasting cabinet is beyond that, and the shelves holding the miscellaneous small bits of the E-Type. ETA on that machine returning is still a bit murky.

Looking forward to getting the cabinetry underway. Along the back wall will be largish upper cabinets, with a nuts-and-bolts organization under a 18″ deep bench. This bench will mainly be used for staging parts and stashing those small projects awaiting time, money or bits–thus allowing the main bench (by the tools) to be kept clear for actual work. The tables can be wheeled out if more space is needed (they will live on the storage side when not in use). I was originally going to build a paint booth along this back wall, in the corner you can’t see, to the left. It would be about five feet wide with an open front, but a closed ceiling and a exhaust fan utilizing the old stove chimney. This would be for spraying small parts, and I still think it’s a good idea. I need to investigate fans and theory before committing to it, though.

The short wall right by the red toolbox, is, I think, destined to be the “sit down bench”, connected with the main bench along the gable. I will have upper cabinets only on this short wall, I’m not going to put cabinets on the gable wall. This sit-down station will be the place for manuals, computer, and other reference pieces, and I’ll probably come up with a “fluids” rack for the current can of brake cleaner, penetrating oil, etc, as well as gloves and shop towels. This “short wall” bench will only be about three feet wide; the wall is five, but the bench along the gable wall will be 24″ deep. 5′ of upper cabinets, though, is just about the perfect size to hold all the stuff I mentioned, and 3′ is fine for stashing a couple of low bar stools underneath a short bench.

Anyway, given my glacial progress, I’ll probably have the valve job done by the spring, and the rest will still be in the planning stage.