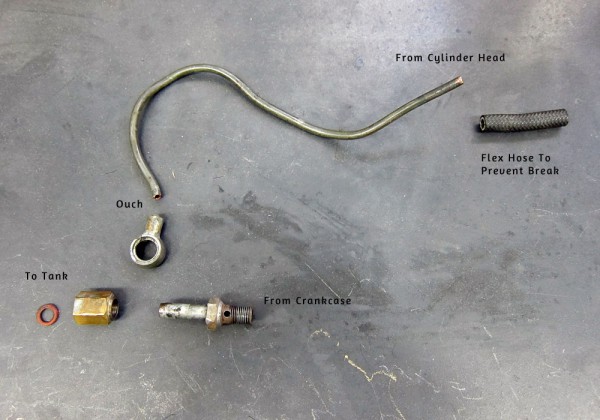 I finally have sussed what was wrong with the Amal 276 on the BSA: The float was set too high (mind you, straight from the maker, but that’s not much of an excuse). Imagine my excitement when I kicked the machine to life and it idled, stone cold–which it has never done. The carb was absolutely full of crud, too, which I suspect is the remains of the old cork fuel taps. (I’ll check it again in a couple hundred miles, but the tank itself was sealed when it was restored.)

Alas. Back from a short “victory” ride, I discovered I was leaving a trail of oil. The photo above shows why: the return line from the cylinder head decided enough was enough.

The offending piece broke right at the banjo fitting next to the tank (see photo below). The line has a flexible piece in it–perhaps a gesture to prevent this very thing from happening, though probably something related to assembly-line logistics. The piece is almost 60 years old, not bad innings, really, considered how vertical twins vibrate. 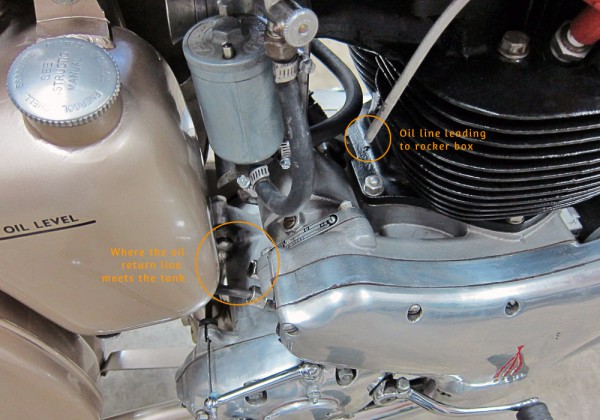 It turns out you cannot get this part new; it’s not even illustrated in the parts catalog. My theory is that the oil line assembly in its entirety, from cylinder head to union at the tank, is covered by the part number in the book, but only the upper part is illustrated. You can get the upper piece…perhaps because the lower line isn’t illustrated, the reproduction parts folk think it never existed. (British motorcycling is existential like that.)

I was able to scare a used line up from my friends at Raber’s Part Mart, and it should be here Tuesday. Hopefully it still has a few innings before it gives up the ghost!