It was only a month ago that I was happily riding down to Crater Lake with my pal Jack, he on his Harley, me on the Sprint. We had a great ride, though in retrospect we tried to cover too much distance on the coast the second day…and the coast was overcast, cold and still crawling with RVs. But once we turned inland at Reedport, Oregon, the skies cleared, we had fabulous roads to ourselves, and it was some of the best riding I’ve done in my life. 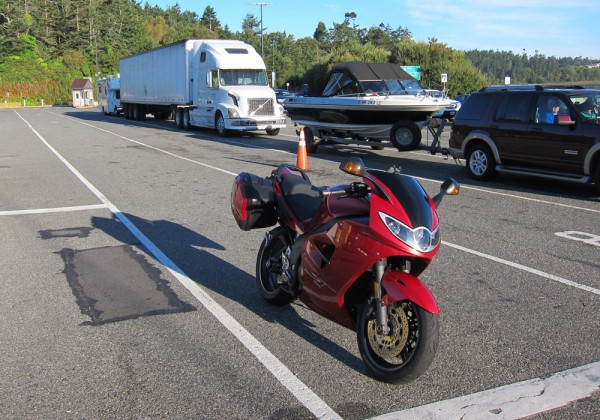 The first day’s ride for me was from south Whidbey up to Keystone, across the ferry to Port Townsend, and then south along Hood Canal to McCleary, Washington, where I was to meet Jack. That part of the ride was enjoyable, but I can see the value in heated clothing and grips (I have a set of heated grips on the way!). There was hardly any traffic and the Triumph made short work of what little there was.

I was in McCleary about an hour before Jack was due to arrive, and unfortunately I exhausted the sights after about five minutes. But it was a warm, sunny day, and I sat outside in the sun to recapture a bit of the heat lost to the chilly morning air, so I had little to complain about. 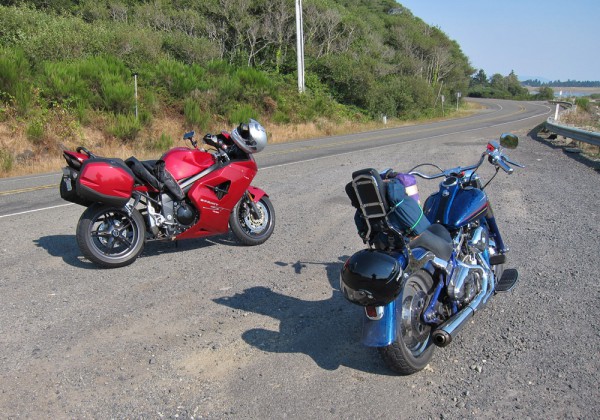 After Jack showed up and we had lunch, we headed out to the Washington coast. At Aberdeen we left 101 to follow 105 along the coast for a bit, and crossed the Columbia at Astoria. From there it was a short ride to Seaside, the first night’s stay. Seaside is a charming, if touristy, little town, and it was an enjoyable place to park ourselves for the night. 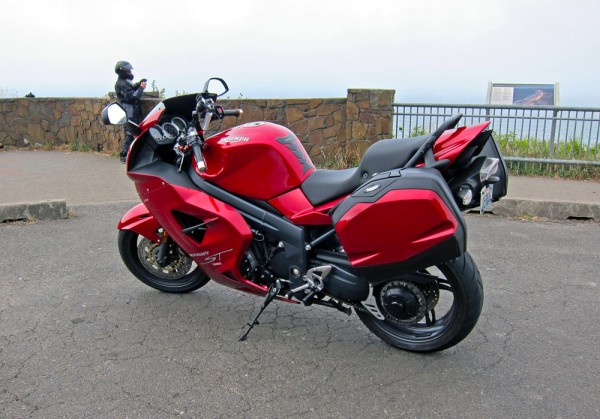 The next day we headed south, into thick cloud and chilly temperatures, for our ride along the Oregon coast. We got a bit of a late start, and with the close-in overcast, we really couldn’t see much…plus, the aforementioned RVs were still out in force. We finally made it to Newport for a late lunch around 3PM. From there to Reedport was a bit better, progress-wise. Still cold and socked in, but we were able to get around what seemed to be the final clump of slow-movers and make decent time to Reedport, getting there a bit after five. From there, we turned inland, and within a few miles we were on nicely twisting two-lane in the sun with no one around. The purgatory of the coast was worth it for the reward of routes 138 and 38. Plus I got to see my first Elk in the “wild.” 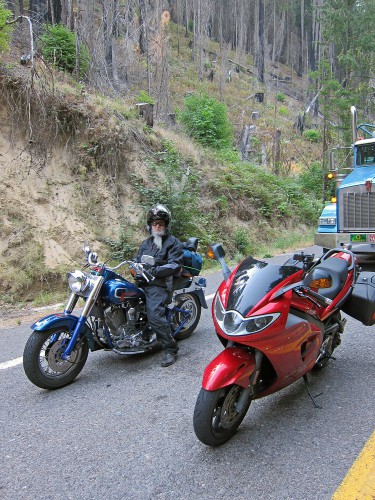 That ride was lovely. We hit I-5 at Sutherlin, and headed from there to Roseburg and inland to Glide, our destination for the night. We got there just at dark, around 7:30. Dinner that evening was wonderful, at the Idewyld Inn, which stayed open to serve us.

The next day: Crater Lake, about 70 miles from where we were staying, though Jack was seriously ill the night before with some sort of stomach bug, and it looked iffy for awhile. Happily he found the fortitude to continue (generic Pepto to the rescue), and Crater Lake itself is simply amazing. We spent most of the afternoon puttering around the rim road and buying souvenirs at the visitor’s center. When we left the park, we headed south towards Prospect, Oregon–but took a wrong turn, which lead to a 20-mile detour…with both of us very low on petrol (the Triumph had much better range than the Harley, but I hadn’t refueled in the morning).

We did make it to Prospect, eventually. From there we rode to Trail, and took a smaller two-lane to Canyonville (which is on I-5). That two-lane was wonderful and we were the only vehicles on it. In 54 miles we didn’t encounter a single oncoming car, and didn’t come upon a car that needed passing. It was hot without being too hot and, again, just great riding. 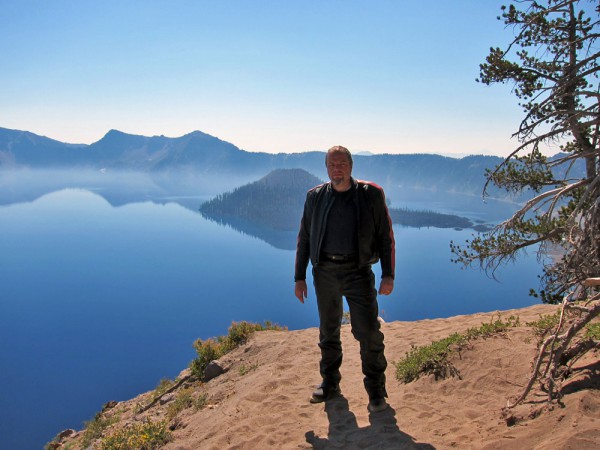 We hit Canyonville at dusk, and my brilliant plan originally had us back out on the coast at the end of the day (which would have been a deer-dodging festival in the dark, not much fun). We decided that spending two days slogging north in the mist and cold behind a bunch of RVs didn’t sound like much fun. We weren’t too anxious to spend the night in Canyonville, so opted to blast 90 miles up I-5 to Eugene to gain some miles back towards Washington for a more relaxed ride the next day. In the morning, we could check the forecast and either head back to the coast or continue north on 5. 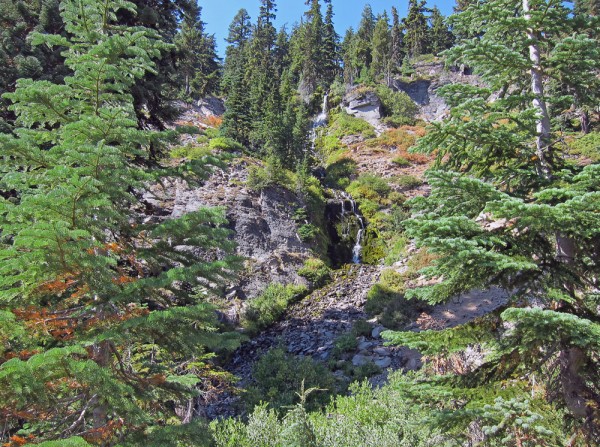 What we hadn’t counted on was Eugene being stuffed to the gills with new freshmen and their parents for the first day in the dorms at OSU. We found the last two rooms at about 10PM and headed off to an all-night cafe for a burger (I’m proud to say this was an all-fried-food trip for me, though my cardiologist would like a word).

The next day the coast was still socked in. It was overcast inland as well, and from Eugene north there really aren’t a lot of options for interesting roads which still take you north rather than west or east. We decided to blast up I-5 to Castle Rock, Washington, and see if we had enough time to turn east and visit the Mt. St. Helens interpretive center before dark. Alas, we didn’t, as, again, we got a late start (but there were pancakes!).

At that point, we cut our losses and decided to head home, a day early. We did stop in Olympia to have dinner, and I’m glad we did. I grew up in Oly and had forgotten how charming the downtown is. For Washington state it seemed quite bohemian, possibly the influence of nearby Evergreen State College. From there it’s about 90 miles to my doorstep here, and I was home around 8PM. As it turns out, Friday was drizzly and cold, and wouldn’t have been much fun to ride in anyway. 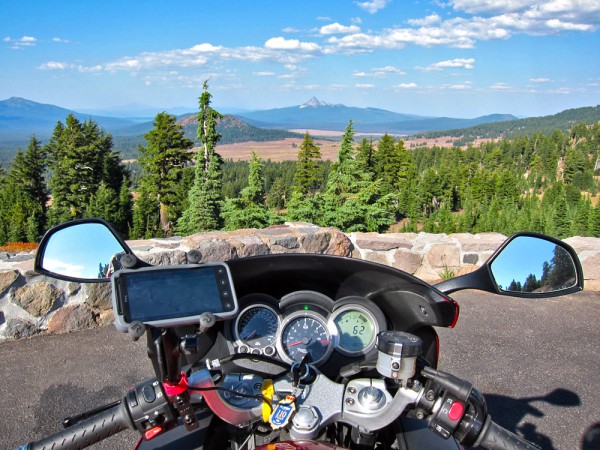 It was a great ride, and the only real downer was having to abandon our plan to ride one leg of it to the east of the mountains. Wildfires and horrible atmospheric conditions put paid to that. Probably just as well, as we had one ambitious segment which would have been a really long day. As it was, our longest day was the final one, about 330 miles, but all interstate; the second day from Seaside to Glide, was about 300 miles, and the Crater Lake day was about that many.

The bike did great, though it was a very iffy starter after having sat overnight. I’ve since replaced the rectifier–I don’t think the bike was charging very well once it got hot. Since then, it’s been pretty reliable. This is a very nice machine and I hope to put a few more long trips on it soon. I was comfortable the entire trip, with the exception of being cold at times, and a heated vest and grips would have helped out immeasurably. Next time!