Sometimes you don’t know you need something until you see it. Sadly, this is not one of those posts. If you dare click inside, you’ll find a lot of photos of the disassembled body frame of this olde Morgan… 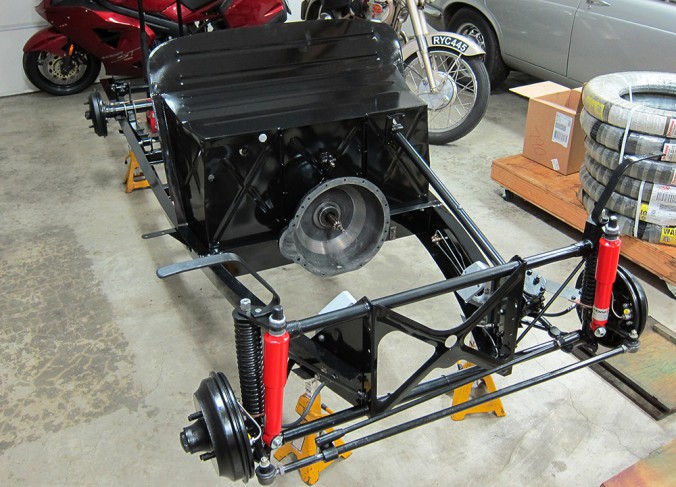 First, above is the car roughly as it is now. I have my inner fenders nearly ready for installation, and that will allow more mechanical bits to be slapped into place…hopefully a couple more boxes can be emptied. I like empty boxes, surely they’re a sign of “progress”? 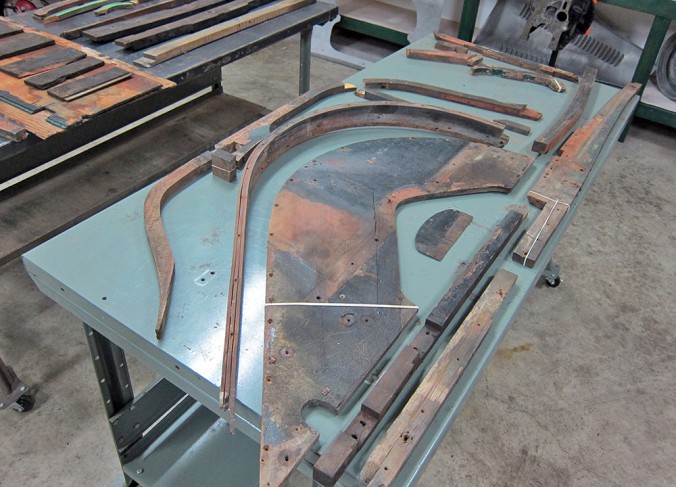 Above are all of the pieces of the driver’s (left) side of the body tub–as far as I can tell, all of them original. My car would have been one of the last cars built with solid wood inner fenders, I gather. They are 5/8 x 12″ boards of a fine-grained wood, possibly poplar, spline joined at the arch. 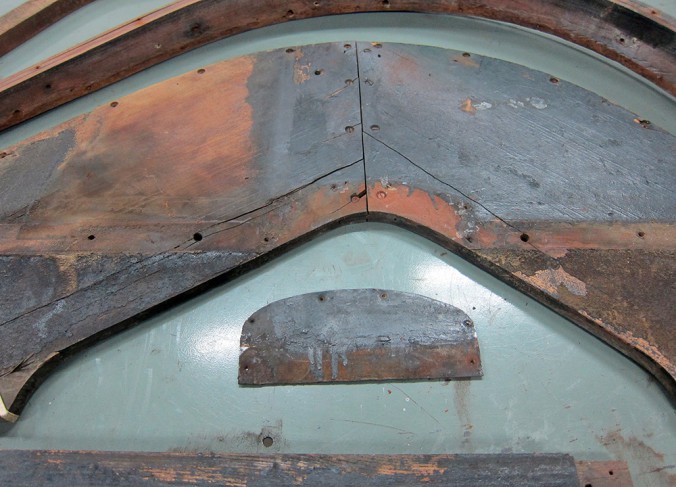 They also have a small steel reinforcing plate. I do not think I am going to build the new tub in this manner; later cars used plywood in a single piece. A piece of 5/8″ baltic birch marine-grade plywood would be much, much stronger than this. You can see all of the ways the original can fail: 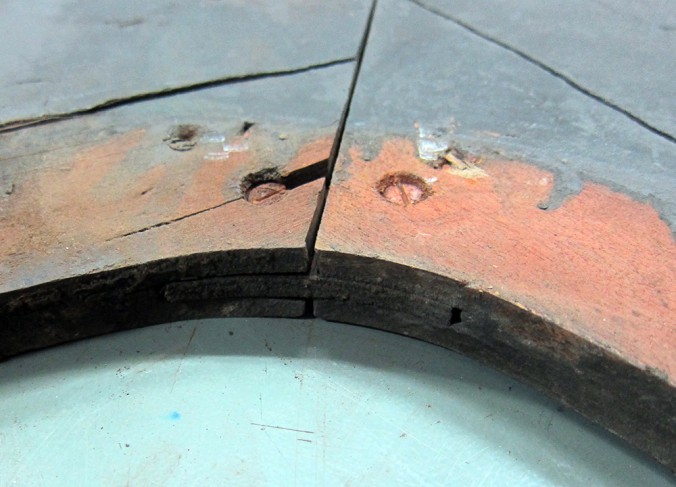 This car’s inner fender was not rabbeted into the sill boards. They have traces of the light green original paint on them, so they’re almost certainly original. I will be rabbeting the new inner fender into the new sill boards. 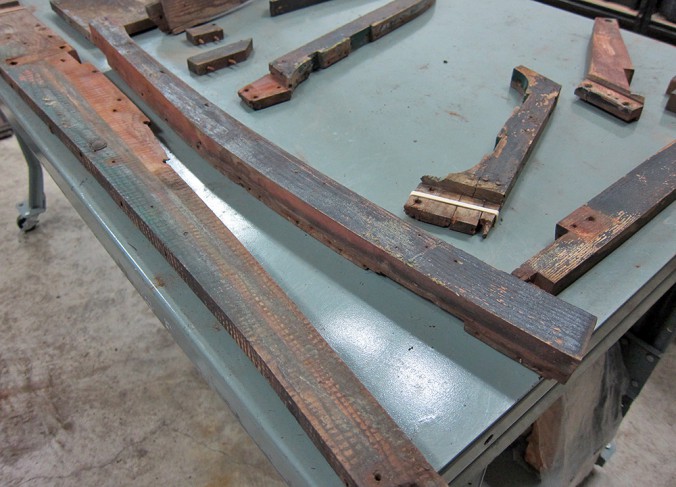 Speaking of the sills, this is the front sill and the rocker. This rocker is actually a nice piece (or was, originally) as the grain is curved and matches the shape of the rocker, making for quite a strong board. 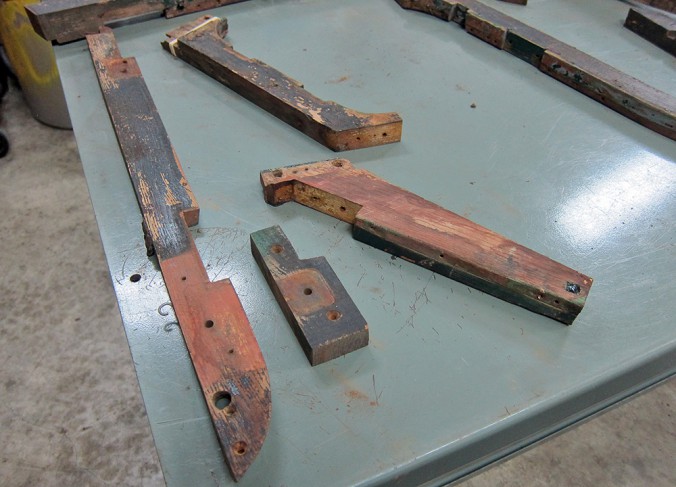 Since we’re up in this corner, these are the bits we saw in an earlier post, they help support the scuttle (and are used to hang the doors). I’ll be tempted when I build this part to add a metal reinforcing-plate behind the door post to help keep the hinge screws from pulling out over time. 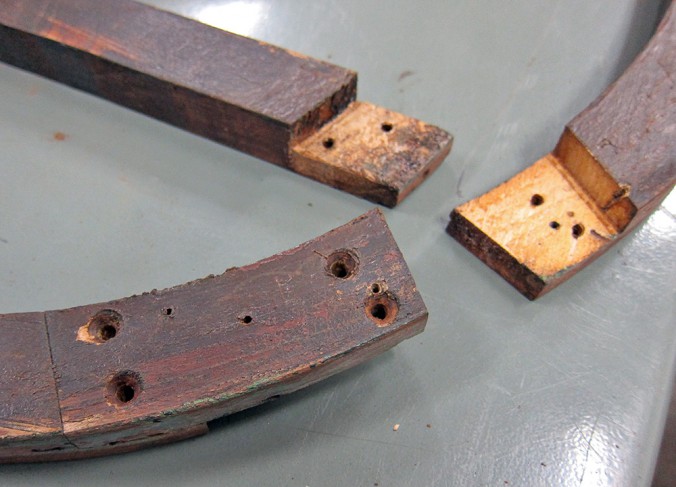 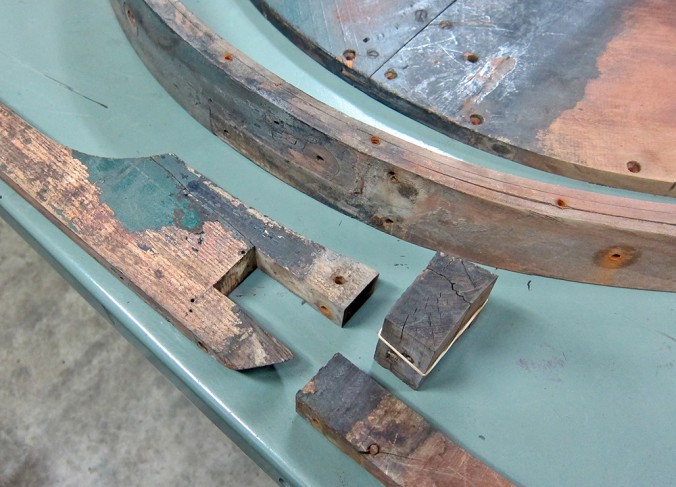 Above is the wheel arch, consisting of three 1/4″ thick ash boards laminated together, and in this case de-laminating. The top rail (I’m probably calling all of these boards by the wrong names, btw), attaches to the arch, and accepts the piece which supports the top of the rear panel. A small block is used to provide support for the cross-member which spans the car at the back of the storage area for the top. 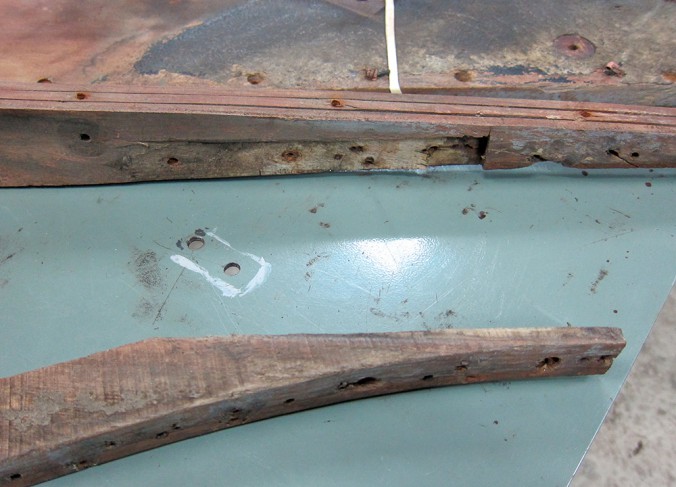 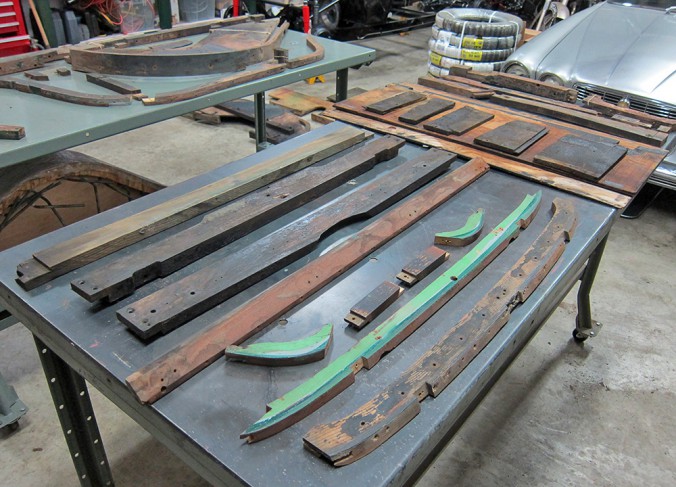 Above are the “cross car” pieces. From left to right in this photo: The lower rear cross-member (which I am 80% sure is a replacement); the two fuel-tank-supports; the upper cross-member (at top of the wheel arch), and the two cross-pieces under the cowl. The dash support is made in three pieces to try and keep some strength along the grain, but even so, is broken at both lower corners. I’m mildly tempted to make that curve as a laminated piece with the grain crossing at 30 degrees. Missing is the lower-bulkhead cross piece; it’s in my pile of “non-original wood”, which you can find below. 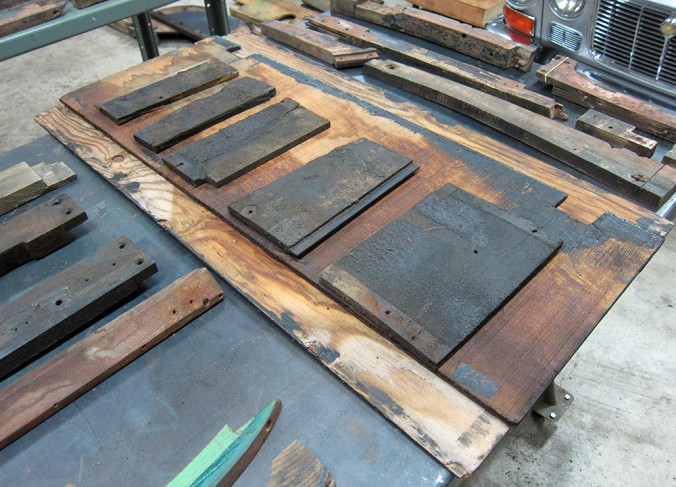 The two pieces of plywood here are the floor of the top-storage compartment and the fuel tank closing panel, which may or may not be original. The motley collection of greasy boards are from the battery area and are probably how the entire floor was originally built: 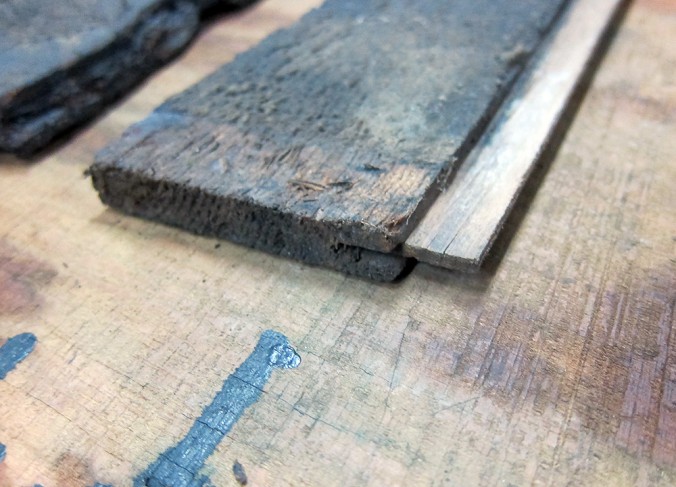 Spline-joined pine boards, probably recycled from crates. The boards are of random widths and would not be as strong as plywood, which they went to on later cars, and which I am probably going to do as well. 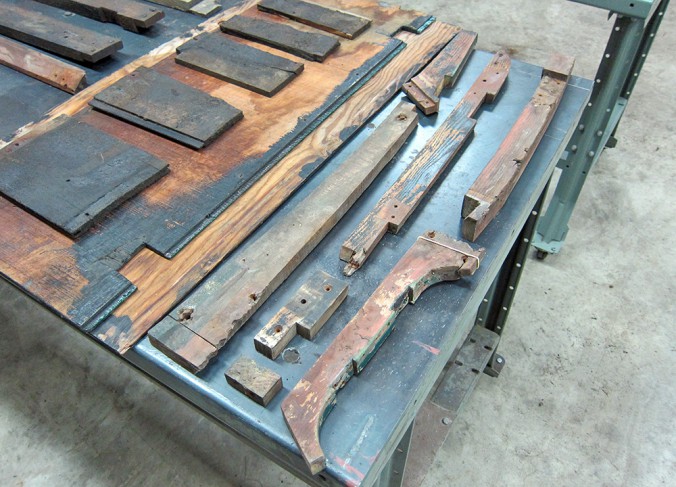 This is the original remaining wood from the passenger (right) side: Half a rocker, half a sill board, and some rather beat-up scuttle and door hinge posts. 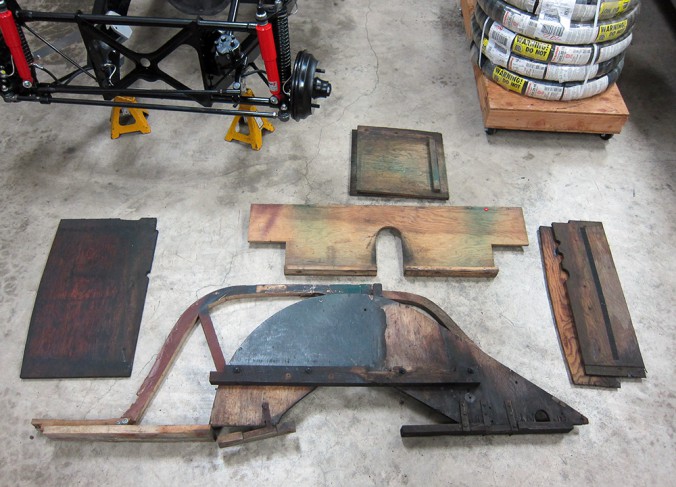 This is my collection of non-original wood. The floorboards are “meh”, but the rebuilt inner fender and attached bits are really something: 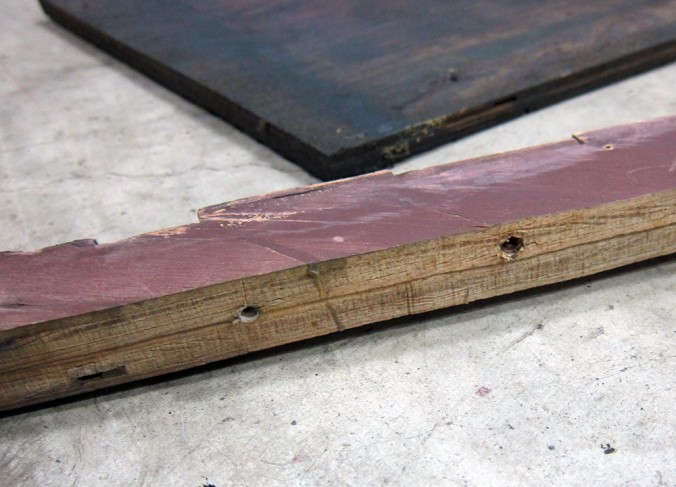 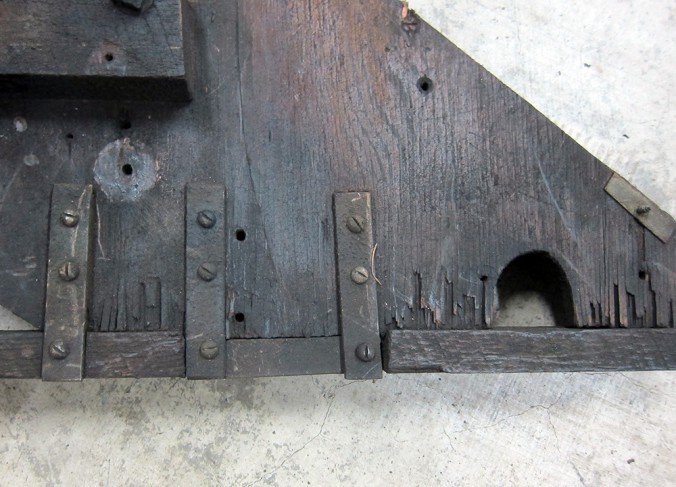 The rear bulkhead, aside from it’s APA (American Plywood Association) stamp on the backside, has this fabric heart glued on: 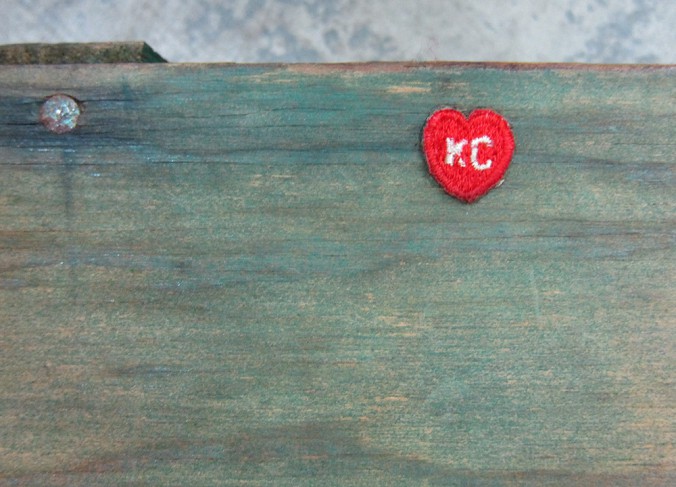 To me, this is evidence that the bodging was all done in KC, and the fellow I bought the consigned car from owned it in its awful condition for his entire tenure, which explains why he didn’t much like it. Perhaps the KC owner also owned the car for the entire time in this bodged state, too, which makes me shake my head, as they drove the car a fair amount. A bit scary!