Chuck weighs in on my mental state, or rather, that I’m mental…what would he think if I told him I wouldn’t mind the car in the photo? I think this is the only marque to herald from “Herriot country.” One of the few cars I can think of named after a celestial body, too. Horizontally opposed four-cylinder engine. And apparently more than half of the production still exists, though it wasn’t really a success in its day. 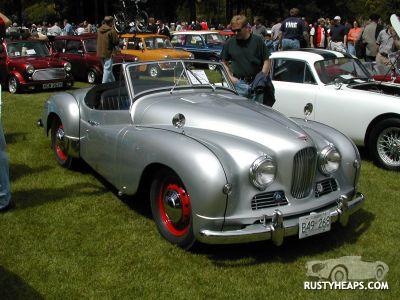 Behold the Jowett Jupiter. It’s a rather homely device but unlike the Daimler SP-250, it wasn’t beaten until the ugly stick actually broke. (I took the photo at the Vancouver All British Field Meet in 2003, I think.)