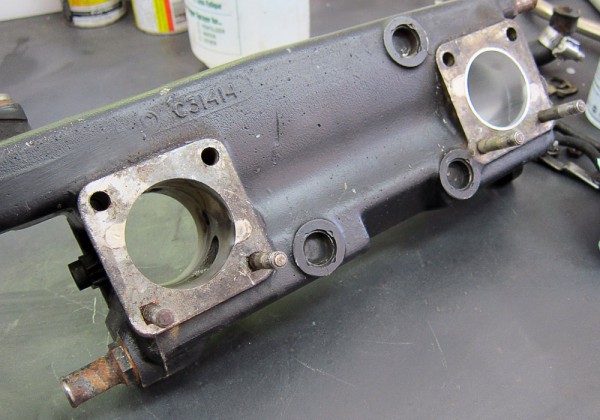 Carburetor-equipped XJ6s have a somewhat oddball throttle setup–a light push on the gas opens the butterfly in the carb, but the charge is routed through a convoluted path in a secondary manifold (as seen above) in order to heat it up. In the photo, the port on the left has had the throttle shaft and plate removed, but you can see the opening for this pre-heat passage on the inner wall.

When the throttle is fully depressed, the secondary butterflies open and the path is more direct. But this complicated arrangement means engine response is not particularly crisp, especially at part-throttle.

I had the carbs off to rebuild them, and decided to tackle the secondary throttle issue by removing the shaft, plates, and linkage, and pressing in a piece of aluminum tubing with an outside diameter of 2″, which exactly matches the diameter of the passage. 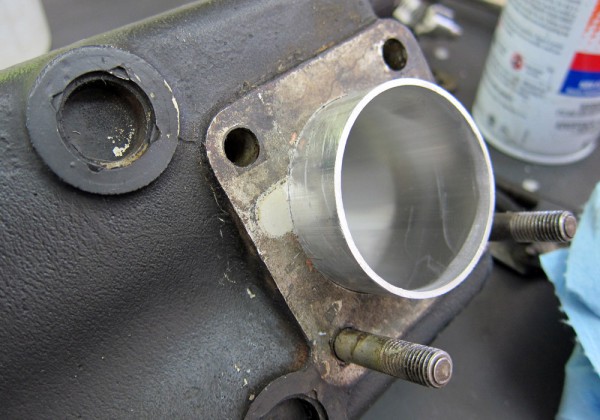 The tube was a tight press fit, and I put a small bead of JB Weld in the opening for the old throttle shaft–both to insure the tube doesn’t move (it really has nowhere to go, in any case) and provide belt-and-suspenders insurance against vacuum leaks (which are unlikely with this mod).

The operation was a success, and engine response is much better. I also took the opportunity to add a Pertronix ignition module in the distributor; between that and the carb rebuild, the engine is running much better…even if it’s still leaking oil like it’s going out of style.