Because I am incorrigible, I flew down to Los Angeles on Tuesday morning and drove back in the latest addition to the heap, a 2013 MINI Paceman “John Cooper Works” All4. It has 22,820 24,060 miles on it, and is in pretty nice condition, with a few telltales it’s not a new car. The main one being Mini has dropped the Paceman from their model line! Above is the car just outside Coalinga, California, about 200 miles into the 1,200-mile trip back, all shiny and glowing nicely in the California sun.

And welcome to Washington, my grey friend: 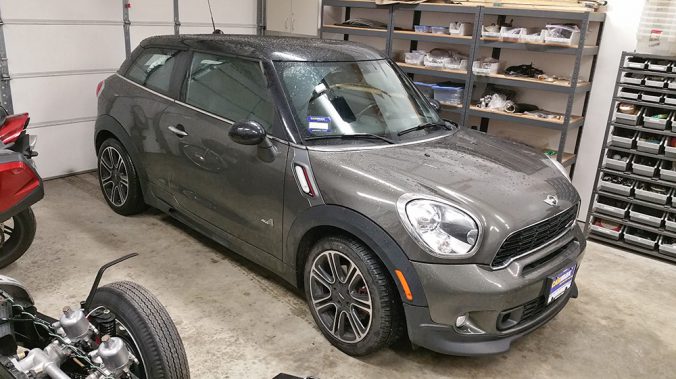 Starting just north of Roseburg, Oregon, it absolutely pissed down, all the way home. But unfortunately for this poor beast, this will be its lot in life, it’s meant as my “real” car. I wanted all-wheel-drive, and decided a JCW car is what I wanted.

Mini made All4 available on the Countryman chassis, and the Paceman is a two-door countryman, essentially. It’s a bigger car than the “regular” coupe, which I’d actually prefer in size. Still, it’s not huge-huge. I stopped at Costco on the way home and it fairly easily swallowed my usual bachelor-chow haul.

This car has a manual gearbox and pretty much every option except navigation. I’m trying to decide whether to put black JCW stripes on the car…most JCWs got them. The only option not on the car I wanted was the 19″ JCW wheels; the car has 18″ wheels, as delivered on JCW cars (I believe). I like them but the 19″ wheels look quite smart.

My friend Steve tells me the Countryman chassis cars were assembled in Austria, so despite thinking I was getting a British car, I did not get a British car.

5:00 AM
Catch the Whidbey Seatac shuttle to the airport. This actually was quite a decent way to get there, I thought. About $40.

6:30 AM
Arrive Seatac. I haven’t flown in 20 years, so the porno-scanner and partial undressing under the watchful eye of our domestic troops was a new one for me.

7:50 AM
“We seem to have a hydraulic leak.” Great, I’m the mechanical equivalent of Typhoid Mary.

8:30 AM
“It was just a spill, sorry, our bad.” I wonder how much money spilling this fluid cost them?

8:45 AM
Take off an hour late. I could have just taken the damn 8:50 flight and had the luxury of sleeping in till five.

11:30 AM
Arrive LAX, glad to breathe some air which had not seen the inside of all of the other passenger’s lungs first. Spend some time trying to figure out how to use Lyft, finally summon a driver to take me to Duarte, about 25 miles away.

11:45 AM
Picked up by Lyft driver. Nice fellow, not a fabulous driver (left lane, 55 mph, which is essentially a death wish in LA) but we got there safely. Little concerned about a car in LA without AC, or at least without it turned on, says the guy who left 32-degree Whidbey Island with a sweater AND a jacket on. (Car was a 2016 mid-line model, does any manufacturer actually make a car without AC these days?) $50.

12:30 PM
Arrive at Carmax in Duarte, the dealer with the Mini. I must say all of my interactions with the people at this Carmax were great. Better yet, car is as described. I like the grey more than I thought I would.

2:20 PM
Leave dealer in the Mini. I paid cash, essentially, but it still takes time to get paperwork filled out. There was no pressure at all to buy extras. I will note I got a screaming deal on this car, it was priced about 20% less than it by all rights should have been. I have a theory about that–it was due to what amounts to a typo–I have no doubt they made money on the car, but perhaps not as much as they could have. Still, with tax, $20,800.

4:30 PM
Eat lunch in a fast-food joint just outside Coalinga, California. I am driving straight up I-5 after taking the 210 from Duarte to Burbank. I’m about 200 miles in. I will not record what my average speed is, but in my defense it seems to be an average speed shared by many, many Californians. $10.

10:30 PM
Redding, California. I was going to stop here for the night, but decide I want to be over halfway home before turning the car off for good. So, refill the tank and head north to Mt. Shasta City, another 50 miles or so. 50 pretty twisty miles, by I-5 Standards. $30 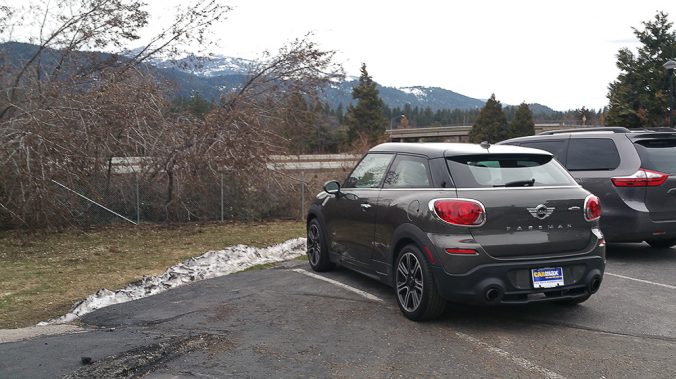 7:30 AM
Breakfast at the Lodge restaurant, better than the burger the afternoon before, that’s for sure. $12.

10:15 AM
Rain starts. It never really lets up, and in some places was torrential.

12:30 PM
Portland, Oregon. A bit of stop and go, Mini is pretty easy to live within traffic, for a manual gearbox car.

3:30 PM
Stop to see my ex and the doggies near Tacoma, Washington. Spend a few minutes there and head north to try my luck at beating the traffic on 405.

4:30 PM
Renton, Washington. Google navigation says it will take one hour and fifteen minutes to travel 27 miles. They are not wrong. What a wretched experience. How do people do this every day?

6:00 PM
Costco, Lynnwood, WA. It’s a new Costco, but it’s not any “better” than my normal run to the Everett location. It’s a Costco. Car-wise, refilled the tank, another $30.

Trip was 1,200 miles, about 17 – 20 hours of driving, depending on your right foot and luck with the law (and I got very lucky at the bottom of one downgrade!). I think, given a really good night’s sleep, I could do it in a single stint…but it would be hellish, especially if you hit Portland or Olympia to Seattle during commuter hours.

Collecting the car cost me about $600, more or less, plus a couple days time. It would have been a bit more cash to ship it, but I had to complete the transaction in-person anyway. Plus it was an adventure, for tame values of adventure.

The six miles home in the Morgan was still by far a more draining experience.

2013 Mini Paceman JCW All4, Past Indiscretions