Lucas gets a bad rap, but they generally built their stuff to last fairly well…bullet connectors not withstanding. Let’s take a look at what the ignition/headlight combo and foot high beam dip switches look like, you know it will be fascinating. Or something. 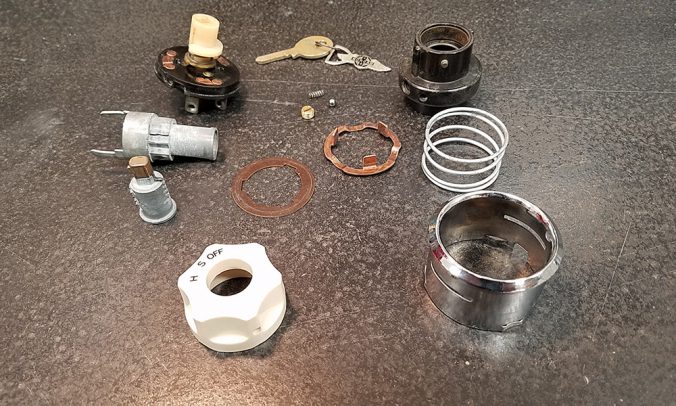 This is the ignition/lighting switch. It was dirty and the contacts were pretty grimy, but mechanically sound.

At the upper left is the core of the switch, the base plate, which still has the center shaft, ignition contact and plastic insulator in place, as they’re held by the peened end of the shaft. The pot-metal casting just in front of it holds the lock barrel, which is standing on its face. The two prongs go through the plate and hold it in place, sort of.

When you turn the key, the brass ring under the plastic insulator rotates, and the two semi-circle bits click into matching brass contacts. You can see a round brass contact which looks like a rivet on the plate, just in front of the copper contact in the center. The two half circles are 90 degrees from the contacts, so almost edge-on in this view.

There are four posts on the back, one in the center, which carries switched-power out, and three around the outside. I believe battery-power-in is closest to us; it connects to one of the brass contacts for the switched-power, and also connects to the copper contact directly above it for powering the lights. The other two posts are side-lights-out and headlights-out.

The copper ring with the tabs on it rides on those contacts. When the lights are off, the ring touches none of the contacts. Turn it to “S”, and the power-in and sidelights-out are both in contact with the copper ring. Turn it to “H” and all three are in contact with the ring. The clicks are provided by the ball bearing and spring, held in with the grub screw to the bakelite piece on the right, riding in the notches on the pot-metal lock keeper.

The phenolic washer insulates the copper ring from the spring, which keeps the whole assembly nice and tight.

The chrome bit is the casing for the entire switch. The lock barrel is released by pressing in a metal pin, accessed via a hole in the bakelite next to the threaded opening for the ball bearing. The knob comes off by a similar mechanism on the switch…the metal ring inside the top of the bakelight piece is the spring for the knob pin.

Anyway, cleaning the contacts and coating everything lightly in dielectric grease has it working well. Not bad for a 62-year-old piece! 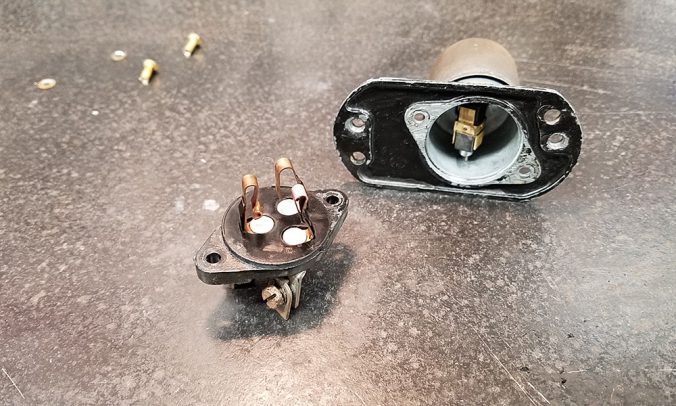 This is the foot dip switch, and while I have it working somewhat better, it may, after 62 years, be ready for full retirement. I was not really expecting this mechanism, it’s fairly ingenious and I assume most foot switches work the same way. You can see a square block with contacts on it, alternating left and right. Constant power is provided by the contact with the kink in it, and rides against the center of that square block.

Every time you push the switch, it travels down the contacts until a corner of the block catches in the aforementioned kink and is forced to rotate 90 degrees as you continue pushing the switch in. The rotation switches which of the other two contacts are touching brass or the bakelite carrier.

You can see the copper contact is pretty squished on one side and while I reshaped it, I suspect it will never be as reliable as it was in 1955. And the switch relies on the kinked contact to be “sharp”, so to speak, and I think it may be fairly worn. Anyway, more grease, cleaning and some screws to replace the rivets drilled out to get inside of this component and it seems to be working. I will not be driving a lot at night, I don’t think, in this car, so it may be “good enough”.