Believe it or not, between the last post and this one, I have spent all my “car time” getting the Morgan scuttle to fit a bit better (again) and then filling it so it wasn’t a complete disaster. A bit more about that inside, but here’s Reg the faithful MGB, and the XJS which was going to be a “quick sale” (and which I need to sell but have not found the time), and Goldie in her carport digs.

END_OF_DOCUMENT_TOKEN_TO_BE_REPLACED

The Coffin They Carry You Off In

As a reward for years of yeoman service, I took a set of spare heads for the F250 into the machine shop today in preparation for FINALLY fixing the cracked exhaust manifolds. The day was mostly spent running Morgan errands, though: Dropping the body panels at the media blaster, the exhaust manifold at the coating specialist, picking up the chrome to ponder what to do after the chromer’s quote came in at an eye-watering level, dropping the axle to be straightened at the differential specialist, handing the kingpins (new bushings), carbs (new throttle shafts), and inlet manifold (aluminum welding) to the machine shop (along with the truck heads), and most of all collecting the World’s Largest Box, seen above, from the trucking company.

END_OF_DOCUMENT_TOKEN_TO_BE_REPLACED 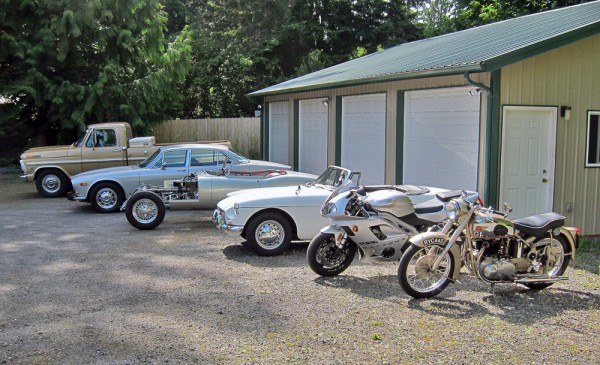 This may be the dorkiest thing I’ve done for awhile, but my life is essentially a string of dorky endeavors. I washed my wife’s car, which made me think I should wash the XJ6, which led to me washing a seagull bomb off the MG, which had me thinking the truck hadn’t been washed since last year…so everything got hosed down. (The bikes were out because I was moving stuff around in the shop.) Why not roll out the E-Type? Somewhere in that sequence it passed from “understandable” to “dorky”; in any case, this was the result. 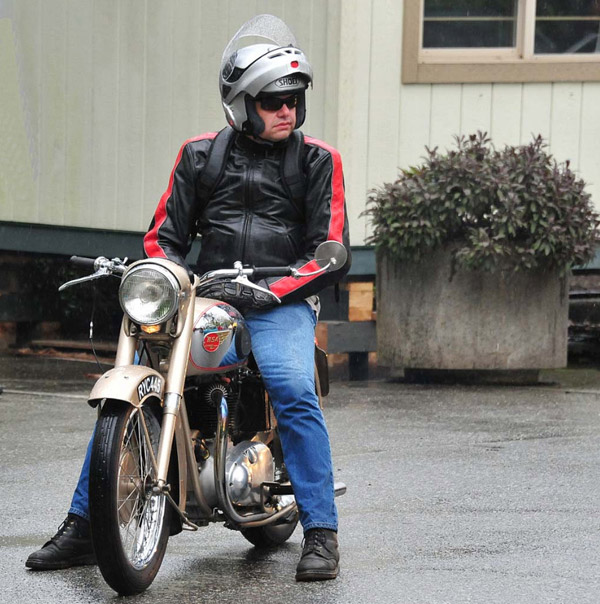 The shot above–featuring a slightly disgusted Your Correspondent–was taken by Peter Laurence (check out his photostream for great shots of the Vancouver ABFM) as I waited for my entry packet in the pouring rain…I had only ridden four miles from the hotel to the gardens, but I was as soaked as I’ve ever been. Friday was gorgeous, and I didn’t even think about packing leathers or rain gear. I didn’t dry out from this 9AM ride until I got back home 12 hours later!
END_OF_DOCUMENT_TOKEN_TO_BE_REPLACED Sigh…still no shop (or even a garage) and many, many things with wheels (not all pictured). I’m thinking of selling the Ferguson–it seems pretty unlikely at this point that I’ll have a use for it…and it’s overkill for even an acre of lawn. Especially one you don’t want field-tire tracks in. Last week, Goldie started emitting horrible noises from the front end under braking, and you could feel a shudder in the brake pedal. I suspected I was running on low pads, but surely they weren’t all that bad, eh? Oops, they were completely worn out! Rebuilding the front discs was an interesting exercise.
END_OF_DOCUMENT_TOKEN_TO_BE_REPLACED I took the BSA up to the Vancouver All British Field Meet at Van Dusen Gardens on Friday. I hadn’t really thought about it, but I suspect the combo above might just be a bit too much gold, like seeing an older couple wearing matching outfits.
END_OF_DOCUMENT_TOKEN_TO_BE_REPLACED

I rebuilt the carb on the F250 a couple of weeks ago, and on Tuesday, that little bit of maintenance came back to bite me in the behind as the truck spluttered to a halt halfway up the hill a mile from home. I was able to coast all the way back into the carport, so Goldie was at least halfway decent about the whole thing.

This led me to replace the fuel pump (misdiagnosis on my part, but, hey, new fuel pump) and the coil–which was arcing everywhere, as it turns out. The distributor cap oddly enough had one completely corroded wire terminal–I mean, there was nothing left. So it’s had kind of a mini-tune-up and will be running on at least one more cylinder than it was recently.

But the problem appears to have been the new float needle valve seat coming loose, which would lead to constant flooding, I would guess. I put the carb back together and on the truck tonight, and it appears to be running well again. C’est la vie. I took Goldie the truck up to Friday Harbor recently to pick up an elderly bandsaw to add to my growing collection of old Delta woodworking machinery. It was about as beautiful a winter day as you’ll see up here!
END_OF_DOCUMENT_TOKEN_TO_BE_REPLACED We don’t normally get this kind of snow down here next to the sea; it was beautiful while it lasted. This photo was taken on Christmas Eve, and the snow is all-but-gone as of today.